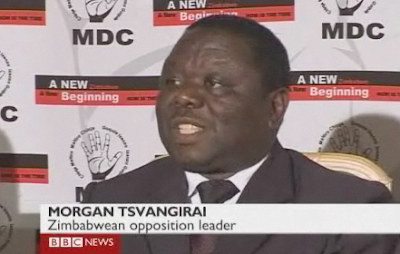 Opposition leader Morgan Tsvangirai returned today to Zimbabwe, where he will face President Robert Mugabe in a run-off election next month.

Reports of political violence – specifically the beating and killing of Tsvangirai supporters by government-backed thugs – have been coming out of Zimbabwe for weeks.

In that context, consider this headline from an editorial published yesterday in the Zimbabwe Herald, the government-run newspaper:

Not till the end of that editorial do you realize the word “disembowel” is meant figuratively. (Or is it?)

According to the Herald, Tsvangirai and his Movement for Democratic Change (MDC) are sock puppets for the “regime change agenda” of Britain and the United States.

“[I]f some among us continue giving the Westerners hope by voting for the MDC, they will only be too eager to keep ratcheting the pressure in the hope that one day, we will capitulate,” according to the Herald.

“However, if we send a clear message to them that we have seen through their ruse by shunning Tsvangirai and overwhelmingly endorsing President Mugabe, they will be compelled to leave us alone.

“June 27 is the day we should send that message, let it be the day we disembowel the neo-colonial project.”

Follow this link to watch a 1½-minute BBC news report on Tsvangirai’s return to Zimbabwe.
Posted by Undercover Black Man at 2:49 PM

Thanks to you Zimbabwe news items have been catching my eye lately. It's rough over there.