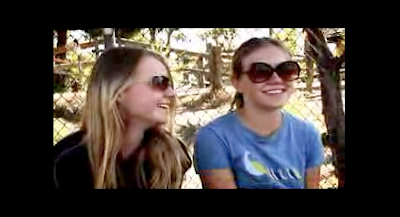 Two months ago, when last we spoke about Prussian Blue – the white-power kiddie-pop twin-sister singing act – S.O.L. commented compassionately: “The only brainwashing that’s been done is to those poor, cute kids. Someone had to raise them to think the way they do and that’s just tragic. I feel sorry for them.”

S.O.L. nailed that one. In July, a TV documentary titled “Nazi Pop Twins” debuted in Britain. Filmmaker James Quinn got up-close and personal with the girls – Lamb and Lynx Gaede – and their neo-Nazi stage mom, April. (And their grandfather, who brands his cattle with swastikas.)

The surprising theme (or maybe not so surprising) is that Lamb and Lynx, as they’ve grown into adolescence, are starting to rebel against their controlling mother. They want to write songs about love and other normal human stuff... not Aryan supremacy. And mom ain’t having it. The tension between them is remarkable to witness.

“Nazi Pop Twins” is up on YouTube in bite-sized segments. I’ve pulled a few segments onto my Video Bar. Or you can watch the complete 50-minute documentary in one sitting by following this link. (Hat-tip: the Southern Poverty Law Center’s Hatewatch.)

Regardless of where the Gaede twins end up politically or spiritually, they’ll never be pop stars. Poor things... they just can't fuckin’ sing. But I do wish them good mental health. 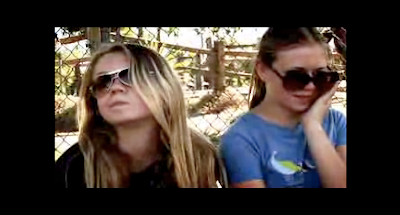 I wish them good mental health as well.

Cute blond twins who desperately want a show business career but have no actual talent?

Who grew up in a dysfunctional family environment?

Out here in Chatsworth, an entire industry exists to provide young women like this w/ gainful employment.

I was watching something on tv today, and there were these two blonde-haired singing twins. I thought about the Nazi twins, but it wasn't them.

It's crazy what memes parents transfer to their kids like commutable diseases. "Good mental health to them" indeed.

And I don't care how cute some people might have found that "Sparkling Wiggles," video; I was not amused.

Lack of talent isn't necessarily a barrier to pop stardom.

I can see some hip hop producer stepping in to give those girls a boost. How cool would that be? Okay, maybe not cool, but it would piss off a lot of white supremacists.

That she claims that she was attacked by a black man (something I do not even begin to believe) and then to watch her pimp her daughters out as "fantasy girl friends" to some gross old man who's in prison for hate crimes is bizarre and outrageous.

I found myself questioning her sanity over and over again.

It also looks like she's been dying the twins' hair as they are both sporting about 6" of brown re-growth.

What's most interesting to me is that despite all of the brain washing they don't seem to buying it and it's clearly causing them discomfort if not downright pain. That they've hatched an escape plan with Grandma gives me hope.

April and "her kind" should be neutered.

UBM, if you don't mind I want to ask you something which is partially related to this video...since you were (are?) a journalist, what do you think of the current state of journalism in the US compared to the UK? I find it very surprising that this was shown on British TV instead of American TV.

I have a huge amount of respect for British news media (specifically, the BBC and The Guardian), and my faith in the American media is waning every day.

Like the late Steve Gilliard says: Black babys. Both of them. By nineteen.

Like the late Steve Gilliard says: Black babys. Both of them. By nineteen.

^ ItAintEazy: I would hedge that bet, and say one of the babies will be Mexican.

SJ: I haven't seen enough British journalism to make a good comparison. And this piece seems to be more in the Brit tabloid tradition than the high-minded BBC tradition.

In general, though, I'm impressed by the global scale of concerns reflected by BBC News. Part of it has to do with the far-flung nature of Britain's colonial remnants. Part of it is just because being in Europe makes you less parochial, more integrated internationally.

What sucks about U.S. journalism, in general, is how little of the wider world gets covered. And that'll be even more the case as U.S. newsrooms shrink. Foreign coverage is the first to get trimmed.

In general, though, I'm impressed by the global scale of concerns reflected by BBC News.

Word. The BBC did a documentary on the Jena 6 case before I heard anything about it in the US media.

American investigative reporter Greg Palast reports for the BBC and London's Guardian newspapers on stuff America doesn't want us to know. I started reading his book "Armed Madhouse" but I was overwhelmed by all the details. There's so much ugly information about this current administration that I just had to take a time out to absorb it all. Maybe, I'll finish it when I get the energy.