Father Coughlin and the Jews 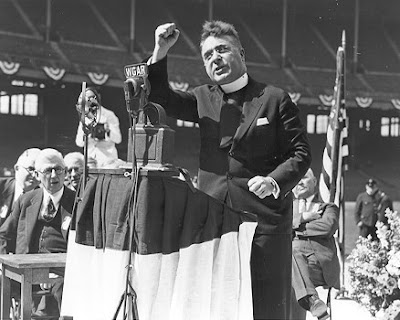 “I speak these words certainly holding no brief for Germany or for Nazism. ... I do ask, however, that an insane world will distinguish between the innocent Jew and the guilty Jew...”

As a student of the racist mind, I naturally study anti-Semitism. But only today for the first time did I hear one of America’s most renowned Jew-baiting rabble-rousers – the Rev. Charles E. Coughlin, the Michigan-based “Radio Priest.”

Father Coughlin during the 1930s had a weekly radio audience of millions. As a populist, he strongly denounced Communism... but also the capitalist “money changers” who were responsible, he said, for the spread of Communism.

Coughlin aimed the spear point of his rhetoric at those all-powerful “atheistic Jews” pulling the strings of both international capitalism and international Communism.

Two months ago, the domain name www.FatherCoughlin.com was registered by a Canadian (under the name Val Volk) as a “memorial” for Charles Coughlin, who was born in Canada. Announcing the launch of FatherCoughlin.com on a Catholic website, Stephen Volk wrote:

“[I]t's time to call a firm halt against the decades of unwarranted liberal slander towards Father Charles Coughlin… While this man should by now be hailed as one of America’s great heroes – who tirelessly fought for the poor during the Great Depression – his name is still being sloshed in the mud of liberal propaganda.” 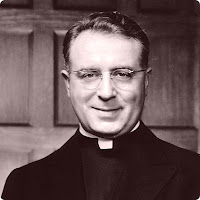 Now I’ve uploaded a couple of 7-minute segments from one speech in particular, titled “Persecution and Christianity.” It was originally broadcast on December 11, 1938.

One month after Kristallnacht, the free world was coming to grips with the persecution of Jews in Nazi Germany. But Father Coughlin had a couple of other points to make. One, Nazism itself was a “defense mechanism” against (Jew-inspired) Communism. Two, the Soviet Communist persecution of Christians was worse.

Click here to hear the first 7-minute segment on my Vox audio stash.

Click here for the second segment, in which Coughlin defends himself, in a sneering tone, against the charge of anti-Semitism.

According to the 1992 book “Seasons of Grace: A History of the Catholic Archdiocese of Detroit,” Father Coughlin’s increasingly strident anti-Semitism in late 1938 was an embarrassment to Archbishop Edward Mooney, even though the archdiocese pre-approved all of Coughlin’s radio speeches.

“Archbishop Mooney himself effected substantial changes in the broadcast of December 11, 1938,” wrote Leslie Woodcock Tentler, “but was unable to persuade Coughlin to alter the subject of the address.”

So if you listen to those two audio bites above, try to imagine what this speech sounded like before the archbishop toned it down.
Posted by Undercover Black Man at 7:21 PM

I always found it interesting how American bigotry went hand in hand with American religion, even though most religions make it clear that there are no differences between all mankind. It always irked me how white people forced blacks to go to separate churches...which is why I take issue with religion in this country.

You put your finger on something, SJ. But it was the same in South Africa, too... Under apartheid, the dominant Calvinist church had doctrines to explain why blacks were on the bottom. ("Drawers of water, hewers of wood"... you get the picture.)

I'm putting a post together now on a U.S. Protestant minister who wrote a tract after slavery was over arguing that blacks aren't even human beings, biblically speaking, but are the highest form of ape.

On the other hand... before you get too Christopher Hitchens-ish... it was also religion that drove many whites in the abolition movement.

On the other hand... before you get too Christopher Hitchens-ish

Ha! I'm not one of those people who think religion is the cause of all evil or should be abolished, my main issue is with the people who practice it.

I should read what he has to say in his new book though.

Amazing stuff. It's interesting how the Jews were simultaneously condemned as money grubbers and as communists. It makes no sense.

Many years ago, I read Gita Sereny's "Into That Darkness" about an ordinary policeman who becomes the commandant of Triblinka. He was imprisoned for years in Germany and she interviewed him extensively. In the course of the story, she documents how the Nazis got the Catholic Church to abdicate its moral position regarding the Jews. They tested the church with the euthanasia of mentally defective children and when the Church raised no objection, they proceeded to the mass extermination of the Jews.

Her position is that basically, the Church chose its own preservation over the fate of six million Jews.

It's interesting how the Jews were simultaneously condemned as money grubbers and as communists. It makes no sense.

Yep, Doug. That's the magic of anti-Semitism. Once you decide that Jews are evil because they are Jews, then anything that any Jew does at any point in history just proves the point.

The religious ones? Well, they hate Jesus. The secular ones? Born socialists. The conservative ones? Zionists above all else. The anti-Zionist ones? Communist internationalists. And so forth.

sj regarding your post; I'm reminded of this quote from Butterfly McQueen:

“As my ancestors are free from slavery, I am free from the slavery of religion.”

I think your buddy Auster may be weighing in with some new accusations about you spreading the Coughlin love all about the blogtown, UBM.
I bet you had that in mind anyway!
Yeah, the good Father Coughlin was certainly an enormous embarrassment to Catholics, but his ultimate superior, Pius XII, was no altar boy either!
A controversial character was the good Pope Pius XII in his failure to swing that Popely bully pulpit of international opinion and condemn the actions of a country that called itself a Christian Socialist entity.
It was a very refreshing experience even as a very lapsed Catholic to hear some of the directly stated opinions about religion made by Pope John Paul II as to the validity and respect to be accorded other faiths and their adherents.
There were a lot of internal decrees of the Church made by John Paul II that I do not favor {my stupid little opinion matters naught to the Juggernaut of Catholicism} but his total rejection of religious intolerance I wholeheartedly endorse.
The actions and words of Pius XII, on the other hand, were not what they should have been

I was commenting on Charles Coughlin a couple of weeks ago because of political commercial online in Mississippi attacking (and even titled) "money changers" - it reminded me of Coughlin.

An interesting post! You may want to checkout fathercoughlin.org which presents a less biased perspective of Coughlin's political view and speeches including anti-communism, anti-semetism, and even his anti-capitalist viewpoints--its worth a read.

As a Jewish studies expert, I had always assumed that Father Coughlin was an anti-Semite until I began listening to his speech and reading his writings in the last few days.

He got a bum rap, and I would argue as an anti-Zionist activist that it is much more important to focus on Jewish fiscal crimes, racism, extremism, and genocidalism than on the alleged anti-Semites of the past.

Was Fr. Coughlin an Anti-Semite givens my current thoughts about charge of anti-Semitism that has been laid upon Coughlin.