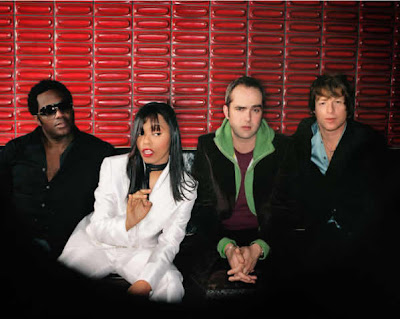 After stumbling upon that Brand New Heavies concert on Fabchannel.com last month, I decided to get off my ass and check out the band live at House of Blues Sunday night.

The Heavies may not be virtuoso musicians, but they are a feel-good party band that gets the job done, and the fans were ready. They were especially ready for N’Dea Davenport, the star of the show, who rocked the older and newer material with power.

I really like how she’s put her own stamp on Stevie Wonder’s “I Don’t Know Why I Love You.” And my favorite cut off their last album – “Sex God” – is a killer concert number, thanks to Davenport’s dramatic performance.

After a one-hour set, the Heavies did a 20-minute encore, starting with a poppin’ version of the White Stripes’ “Seven Nation Army.”

Good to see the Brand New Heavies still got some life in ’em. No doubt there’ll be more albums and plenty more gigs to come.

In the coming days and weeks, BNH will be opening for Macy Gray on the “Big and Heavy Tour.” (They’ll be in Forth Worth tomorrow night, and from there hitting Louisiana, Mississippi, Detroit, Cleveland, Chicago, Columbus, New York, Baltimore and D.C.)

If you want to see a Fabchannel clip of the Heavies performing “I Don’t Know Why I Love You,” click here.

And I’ve got the album version of “Sex God” streaming on my Vox site; click here to check it out.
Posted by Undercover Black Man at 6:19 PM

what's your email addy? i have an off topic question.

p.s. brand new heavies? i've never heard of them. geez, i'm living under a rock. i know i know :)