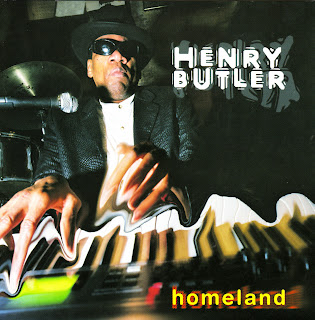 I’m sending this one out to my boy David Simon. He hired New Orleans pianist Henry Butler along with Corey Harris to record the main title music for “The Corner.”

That was my introduction to Mr. Butler’s extraordinarily versatile playing.

Here’s hoping that once the writers’ strike is settled, HBO will greenlight Simon’s next series idea: a drama based in the New Orleans music world.

Posted by Undercover Black Man at 10:01 AM

Thanks for the wonderful clip.

Henry Butler and Corey Harris - that's quite a blues pairing, two of the finest. I had the good fortune to see them together in New Hampshire a few years ago when they toured in a show called "Front Porch Blues" which also included Elvin Bishop, Charlie Musselwhite, and Deborah Coleman.

I also just saw the fabulous Mr. Butler at a blues festival in Maine this past summer - here's a rather poor photo, but I was lucky to be that close to the stage. He was part of a "piano blowout" featuring him, the ever-debonair Kenny "Blues Boss" Wayne, and Barrelhouse Chuck. The other two artists were both quite excellent, but Henry Butler was superlative. Someone who was at the fest filmed his performance and posted two clips at YouTube. While the sound is a bit rough, Butler fans might enjoy them: Henry Butler, part 1 and Part 2